I reviewed The Boxtrolls for my animation blog.

The Boxtrolls tells the story of a young boy who grows up with the titular cardboard-bound monsters, and how he has to save them from a band of troll-catchers who have convinced the town that the harmless creatures are, in fact, evil. But it’s also about a city obsessed with cheese, a class system based on hats and a girl who is obsessed with death and violence. It’s gross, silly, sharply satirical and is actually for children. It must be a Laika film. 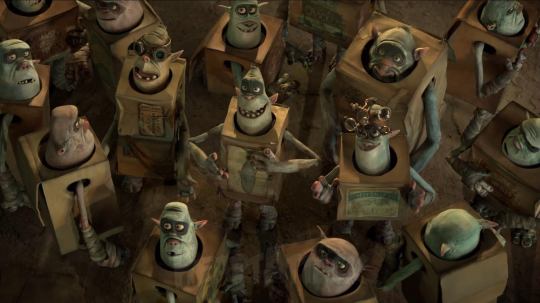 Laika, the animation studio behind under-appreciated marvels Coraline and ParaNorman, are exceptionally hard workers. Animation is a time consuming process that requires a near miraculous attention to detail, but stop motion animation, the process of taking 24 photos of precisely positioned models for every second of film, is a doubly difficult discipline. Every minute of footage you see contains 1,440 photos, so The Boxtrolls, their latest film which runs at 100 minutes, is 144,000 photos long, each one moved ever so slightly to create the illusion of life. Any stop motion film even existing is reason, therefore, for celebration. Laika go the extra mile by making each of their films immensely imaginative and distinctively theirs, making each new release something to be greatly anticipated. Yet there is a sense with The Boxtrolls that the animators are fed up of going unnoticed – some early promotional material focussed on how much work they put in, while a hilarious mid-credits sting shows the animators at work. They want people to see what they do, that they are hard workers.