Mitchell’s signature style – weaving multiple narratives into one arc – is at its most coherent here, each section recognisably building on the last. The author’s trick in Slade House, however, is to seemingly repeat the same plot beats each time, only with different characters. He creates rules within his worlds, everything has to follow these patterns he creates. Such rules are, as per usual, drip-fed to the reader, so what starts as obscure and alienating soon emerges into clarity – think of how The Bone Clocks didn’t make total sense until the penultimate section. As Slade House is a horror novella, the more you find out, the more horrifying the world and its rules become. The reader ends up in the same position as the characters, trapped in the vicious cycles of Slade House, desperately seeking some kind of escape.

I reviewed the second season of Bojack Horseman for the streaming reviews site VODzilla.co

The first few episodes of BoJack Horseman Season 1 started poorly. The title character is a washed-up ex-sitcom star, who starts to work on his memoirs with a spiky writer, all while trying to salvage his career. The jokes were fine but nothing to recommend it in a TV world saturated with comedy, and it felt a little bit obvious and cheap. The arrested development, buffoonish hero whose arrogance is matched only by his stupidity is a comedy staple, as seen in… well, almost every TV comedy of the last 20 years. The faded star premise was an interesting one, but you would be forgiven for giving up after a couple of episodes. Then, something special happened for those who persisted.

I took a look at the Edinburgh International Film Fest programme upon its release in May.

The Edinburgh International Film Festival once suffered a year of ignominy that still gets talked about in hushed tones, with critics whispering to one another, “I was there in 2011.”

In hindsight, I don’t see it as such a terrible time and there were some genuinely special films on screen that year. Honestly, if you haven’t seen Alma Har’el‘s Bombay Beach, you really should seek it out.

But some terrible choices of opening and closing films – I’m looking at you, Hyena – and a lack of sustained interest from better-known critical voices have meant that the last few years have remained low-key, and almost buzz-free too. But for local cinephiles, however, Edinburgh’s festival has remained an absolute treasure trove of undiscovered cinema.

I interviewed the Moomins Mogul Sophia Jansson about Moomins on the Riviera, for Film Divider.

Film Divider: You said five years ago in The Guardian that you do sometimes get a little irritated with the Moomins, and that would like a life outside of Moomin Valley. How are you feeling about the Moomins today?

Sophia Jansson: Is it alright if I call it a love/hate relationship? Of course I do it as my job on a daily basis, so I mean I would be stupid if I didn’t like it, because I could do something else. What I like most about working with the Moomins today is that we’re in an extremely dynamic phase at the moment. It makes it all the more fun, because you can do – if you really put your mind to it – such wonderful things with a classic old brand, if you try and do it with your heart and soul and mind. So it’s been quite rewarding lately.

I shot some of the footage and edited this promotional video for my church’s weekend away.

Sylvain Chomet is a director known for his wordless, bizarre and beautiful animations Belleville Rendez-Vous and The Illusionist. His latest film, Attila Marcel, is his first live-action feature, but contains many of the hallmarks of his earlier work, featuring silent characters, absurd imagery and a slightly macabre sense of humour. I met up with the talkative director to talk about the transition from animation to live-action, and whether Attila Marcel is all that different from the rest of his work.

GFW: Attila Marcel is your first live-action feature. Did you choose to do live-action because of the lengthy production time that goes into animation?
Sylvain Chomet: I would never have done Attila Marcel in animation because I wanted lots of dialogue and I wanted to work with the actors. There are things you can’t do in animation. I mean, the eyes of Guillaume Gouix [who plays Paul, the main role], the way it plays… animation can’t do that. That’s why I really wanted to do live-action – all the human things you can bring.

I reviewed Dreamworks’ latest for my animation blog. 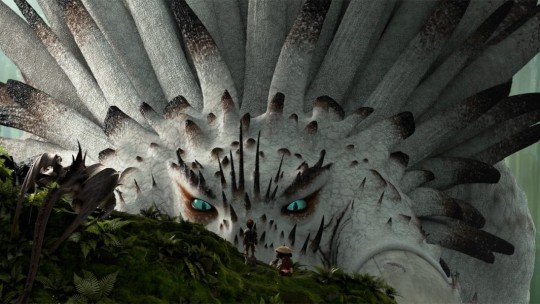 The first How To Train Your Dragon film ended on a surprising note for a big studio animation in that the main character lost one of his legs. Contrary to just about every other animation out there, the action sequences in the spectacular finale had actual consequences. It’s a bold move, and was one of the many elements that made it stand head and shoulders above everything else Dreamworks animation – and most other CG studios – has released. There is a scene in the middle of that film’s stunning sequel that takes such consequences to a new level that is, again, completely surprising for studio animations of the CG era. This is just one aspect of the first film that has been carried over into the second film, not in a lazy, same-but-bigger approach, but in a way that it keeps everything that made the first so good, all while telling a different story. In that sense, it’s up there with Toy Story 2 & 3 as one of the best animated sequels ever.

I reviewed the latest boxset of Ealing films for Front Row Reviews. For more DVD and Blu-Ray reviews by me, including Cria Cuervos, Mundane History and The Adventures of Prince Ahmed, visit the site.

If anyone were to create an argument about whether America or Britain has produced the best comedy in cinema, the case for the States would be a strong one:Airplane, Hal Ashby, Woody Allen and, erm, Hot Rod, would fly the Stars and Stripes proudly. Any argument you may form in this hypothetical, pointless discussion to claim the US has made the best comedy, however, could be undone by one word: Ealing. Before even mentioning the Cornetto films, Monty Python orLesbian Vampire Killers, the studio responsible for this delightful trio of films (Kind Hearts and Coronets, The Lavender Hill Mob and The Man in the White Suit) would surely lead the charge for the UK. Not only because the films are hilarious, satirical and dark, but because they are also so very, very British.

I reviewed The Zero Theorem for The Skinny. For older reviews by me for the Skinny, please visit their website’s film page. Reviews include: These Birds Walk; The Congress and Monsters University.

In the vein of Spike Jonze’s Her, Terry Gilliam’s latest sci-fi, like all the best films in that genre, puts humanity under a microscope lens and searches for its meaning in the modern world. In an increasingly digital society where what we see on our screens steadily replaces reality, the questions of what it means to be human and how we connect with others become ever more urgent. Gilliam’s magnifying glass, however, is far grimier than the slickness of Jonze’s Apple store world; his conclusions are, too.

I reviewed Neil Blomkamp’s Elysium for kamera, and was one of the only people who liked it. For older reviews by me, including 10 reviews from Edinburgh Film Fest 2014, please visit the site.

JC Chandor, the director of the critically acclaimed Margin Call (2011), made an interesting decision when approaching his second film: his debut was a dialogue-heavy ensemble piece about the financial crash of 2008, but his second film, All Is Lost (2013), starring Robert Redford, is a nearly silent film about a man lost at sea and has only one cast member. It’s as big a contrast between two films as you can manage, an attempt to prove that the director has a varied and interesting bag of tricks. Whether he was successful remains to be seen – although it opened in Cannes to a generally positive reception – but it does highlight the issue of that difficult second film; a hot young director fresh from the success of his critically adored debut faces a big decision about whether to try something completely new or do more of the same but bigger and better. Neil Blomkamp, who directed the stunning District 9 (2009), is a bigger name than Chandor, so his next step has been keenly anticipated. His debut was Oscar nominated, produced by Peter Jackson and is seen by many as one of the great sci-fi films of the last five years, so what next? The answer is Elysium, and it is clear within the opening exposition of the film that Blomkamp has opted – disappointingly for some – to go with more of the same, only bigger.